How can we help you today?

Set up alignment is the one of the basic alignments in CAPPS. In order to perform setup alignment, user needs to measure three features to lock all the six degrees of the freedom. 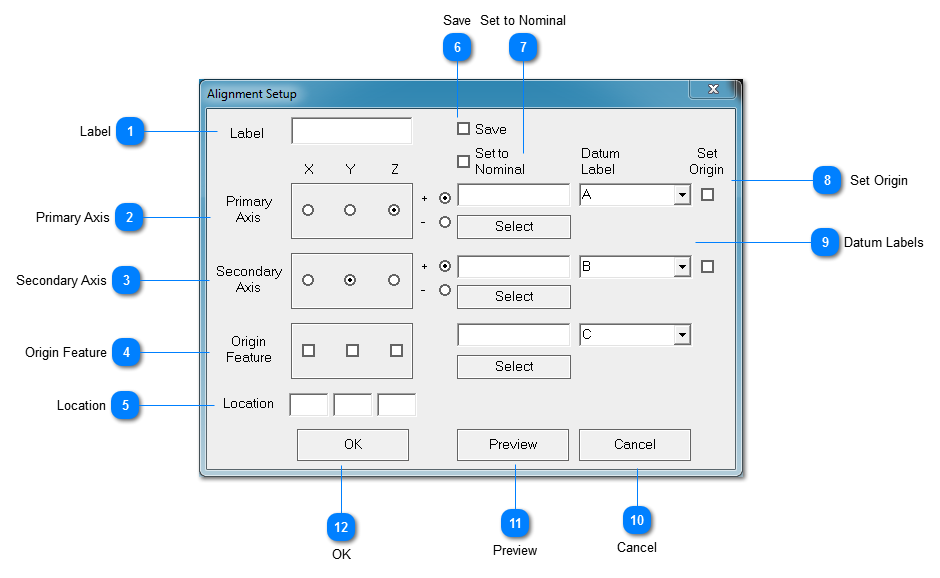 Feature that is in the Primary Axis is used to level the part thereby eliminating 3 degrees of freedom, normally a plane feature. However, this could also be any axis feature like a line or a cylinder.

Secondary Axis is normally used to lock the rotation of part, thereby eliminating 2 degrees of freedom. Feature used for a secondary axis would normally be a plane, or a line

Note - User can specify the direction of axis using the + and - sign check boxes for both Primary and secondary features.

This option will work to set an origin on a feature in one or all three axes and may be used in conjunction with the origin feature.

Value in the location section translates the location of coordinate system from the feature with respect to specified Axis (X, Y and Z)

Will Save the alignment with the given label name.

User needs to check Set to Nominal, when user want to make an alignment with respect to nominals for the actuals that used in the alignment.

User can set the feature that is selected for Primary or Secondary axis by checking the Set Origin option.

Note - If there user check Set Origin to Primary Axis for one axis, that axis can not be assigned in the Origin feature.

Will specify the Primary, Secondary axis and origin features with the alphabets assigned to them. user can change the alphabets using the drop down menu.

Cancel will exit the window without creating the alignment

Using Preview, user can see the alignment before creating it.

OK will create the alignment with given label name.

Following is the example of creating the basic Setup Alignment. 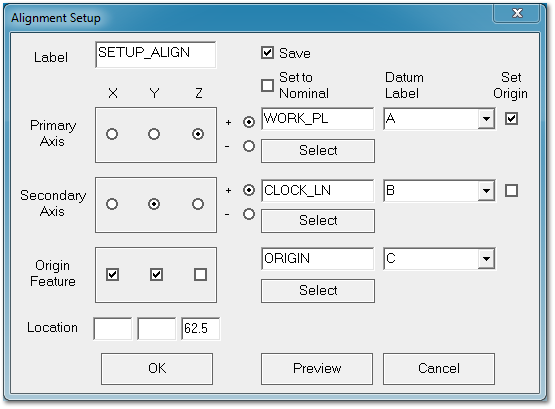 DMIS code for the Setup Alignment

Above DMIS code specifies the following

Coordinate system when Location is not specified

Coordinate system when Location is specified

Did you find it helpful? Yes No

Send feedback
Sorry we couldn't be helpful. Help us improve this article with your feedback.